I thought I'd post for once, saying: things are good. I've got a good job, an artist-in-residency, my dog is cute beyond reasoning..I'm happy. It's nice.

No where else to post this that I feel comfortable.

Everything hurts.
Everyone leaves.

I'm so angry at my family and at my dad; for so many reasons. Feelings of grief mixed with feelings of anger for disowning me without me knowing. So much anger at my stepmom. So much misery. I don't want to go outside or interact with people. I wish I could disappear- but, you know, money. I'm trapped and miserable and alone.

Let me vent about how much I have to do right now:
-design, plasma cut and build large part of FLG structure
-handle printing of Man Krew shirts
-design wedding invitation for friend
-get ready for another RadioShack Shoot, which includes finding projects and finding and securing shoot site
-design Tip Sheet for BurningMan (you know, the one they hand out at the gate)
-get a trailer ready for the playa (maybe..haven't gotten it yet)
-get Starboard kits ready, because I'm leaving for NYC right after returning from BM
-manage helpdesk account job
-find a subletter
-find a new roomate (?!)

All this before August 15th, when I leave for the playa. Also, my birthday is coming up :-/

Score this design: "Brain Storm," to help it get printed on Threadless!

I've been trying my hand at threadless submissions lately. They're fun to do- the competition is pretty fierce but Ive been enjoying doing more design, and the possibility of getting paid pretty well for it is nice, too. Go vote and help me get it printed!
In other news, I've been having trough with upstairs/downstairs neighbors, who are both partiers. The house is really poorly insulated which ads to the problem. I'm looking for a new pad, but at least l have the benifit of not having to move, just wanting to move.

I've been graciously awarded a grant from non other than the Awesome Foundation, which I'm terribly excited to announce the project:Starting on the 1st of January, 2011, I will be making one scarf a day, everyday, for the whole month. These will be made of all sorts of materials- some will be utilitarian, some will be nerdy, some might even be edible. I’ll be blogging as much as possible here, with tutorials and progress shots and all that goodness. You might also want to follow my twitter (@satiredun) for updates.While the grant is a great start, I’m also doing some fundraising on my own so that I can make some really super awesome scarves. Please consider donating!

Kickstarter link, since it seems LJ hates it's embed code:http://kck.st/etbbbP 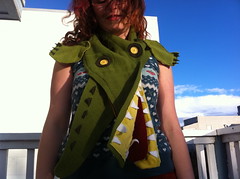 In the wind
Originally uploaded by ladycartoonist

I'm moving to a hostel today, hopefully.
I say hopefully because I'm still out in the middle of nowhere with no transpo, so I have to figure out how to GET to oxford, which is like 40 minutes away. A friend of a friend is meeting me for lunch, so..I might have to ask him, which Is kinda lame, but there you go.  Also, I think I'm getting sick, which means I pro'lly can't visit my dad until I'm sure, as his white blood cell count is still way down. Grr.
It is now comics makin' season. I feel it in my bones.
AND, for some reason I will never understand, winter is the time I always feel like going to Portland. Probably because that's where all the cartoonists are these days, and I really enjoy sitting in a cafe watching the rain. I guess that's Seattle, too, and though I know more people there, Portland is somehow more..quaint.
24 hour comics day is right after I get back, and I'm stoked. Though..I don't have a table at APE, which bums me out. I guess this means I'll try to book one for Emerald City Comic Con (in Seattle), though I made almost no money there, it was fun as hell.
Fall winter= drawing time.

Im in a remarkably good mood.

Ive been spending the last two weeks in various states of sick. i had a really bad cold/flu and now i have an earache so bad im going to the hospital.
Im also, still, super poor- the job hunt has turned up squat, and though im still applying, my funds are drying up, fast. ergh.
im oging up to seatle for a con in a couple weeks and I can't afford to reprint the books that were destroyed when NB's roof sprang a leak.

but ya, still in a pretty OK mood.

Yesterday I drew a comic every hour. It was challenging but super fun, as these things tend to be. Enjoy.( Collapse )
Collapse